Looking For A
Quote?

Our experts can help.
Consult our product specialists today.

Crop irrigation requires intervals of water through a system of sprinklers. There are several types of irrigation systems, but one of the most popular is the center-pivot.

Most center pivot irrigation systems are propelled by a small electric motor mounted at each tower in what is called the tower panel. Each motor is controlled by a percentage timer. Without this timer, the farmer must manually switch the irrigation system on and off. The percentage timer is much easier to install and adjust compared to other timers. It also offers variable adjustment options and a hands-on interface. This is important for quick maintenance and little downtime. Once farmers know how much time the sprinklers need to run they can “set it and forget it”, freeing up their time for other duties.

Wiring is made simple with only four electrical connections in a straight line on the back of the timer's body. As mentioned before, this timer is made to be mounted on the control panel of the system. The CT4 boasts an easy-to-turn knob, allowing users to switch from one percentage to the next swiftly.

A plastic guard over the terminal block helps protect the user's fingers from being exposed to the contactors. Once the timer is set, it will not rotate any further without intentional force from the user. The housing protects the internal mechanics of the timer from environmental elements resulting in a longer lasting product and additional safety. 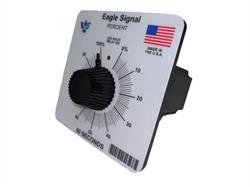 The CT4 Series percentage timer is designed for use in applications where a repetitive “on” time of a fixed cycle needs to be a variable.

We can help you find the right solution
Consult our experts today!